The Athletic has looked at the accounts of the 20 clubs who will form the Premier League in 2021-22 and has applied a much simpler and cruder version of the formula used by La Liga above (we don’t have an army of analysts to crunch the numbers) to see the potential budgets that clubs would face in the forthcoming season.

What if the Premier League had spending caps for clubs like La Liga?

With Barcelona struggling to meet La Liga's economic rules, we look at what might happen if the Premier League replicated that spending cap 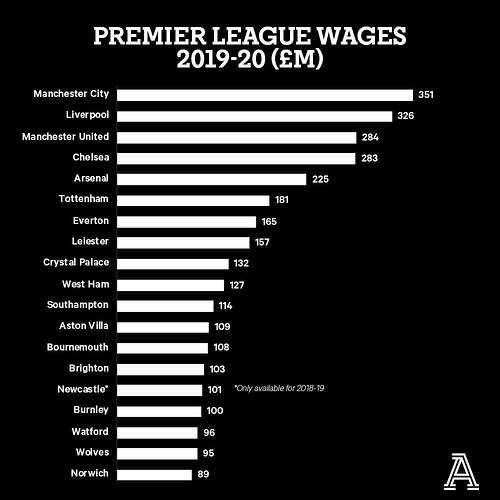 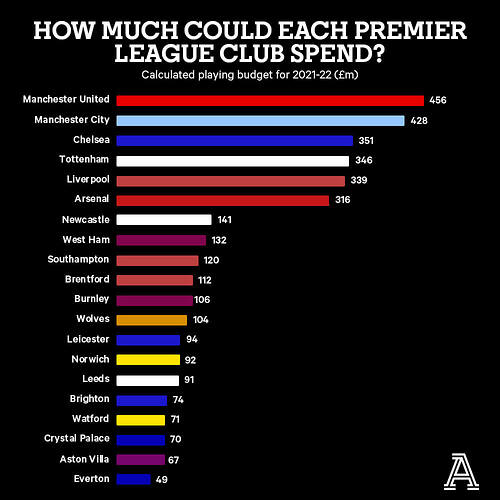 In La Liga, the “Economic Cost Control” measures that operate there are forward based, rather than assessing clubs on their past financial results. The approach taken is aimed at preventing clubs from overspending and the resulting unsustainable debt.

Clubs have to submit estimated figures for both their revenue (including player sales) and costs, including player purchases. La Liga’s team of spreadsheet experts then analyse the estimates for reasonableness, looking at transfer values in the present market for example. On the back of these submitted figures, La Liga then gives the clubs a total sum that they can spend during the following season, but allows the clubs to allocate this between transfers and wages (including the academy, first-team coaches and physios) as they see fit.

La Liga’s rulebook covers 261 pages and the formula used to determine the actual budget given to clubs is, a bit like Kentucky Fried Chicken’s blend of herbs and spices, a closely-guarded secret. Each La Liga club is then assessed on its recent cost control over the last three years and this is compared to the budget. The main elements of the formula used by La Liga’s analysts involve four financial metrics:

Financial profitability (profit generated by the partners and owners)

Where La Liga rules show their teeth is that clubs have to register their players using an app as they are signed. If the wages and transfer fee result in the club exceeding the allowed limit, the app flashes red. This means the club either have to reduce wages with existing squad members and/or sell a player so that the new recruit can be registered to play for the forthcoming season. Barcelona’s problems for 2021-22 are well documented.

The effect of this on the back of COVID-19 was to hit clubs who had been overspending hard, but if it helps ensure long-term survival then it could be deemed to be a financial challenge worth undertaking. 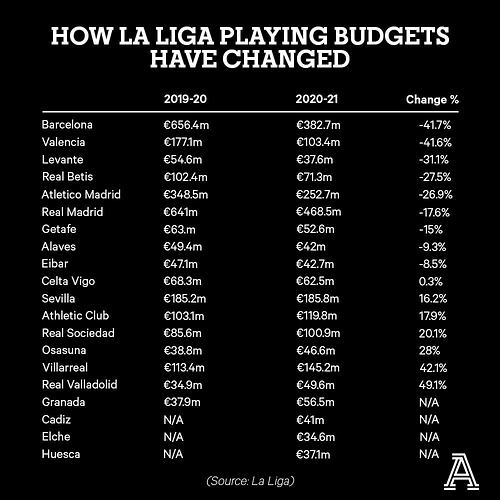 The Athletic has looked at the accounts of the 20 clubs who will form the Premier League in 2021-22 and has applied a much simpler and cruder version of the formula used by La Liga above (we don’t have an army of analysts to crunch the numbers) to see the potential budgets that clubs would face in the forthcoming season.

In the case of, for example, Manchester United, we started with a full year’s revenue using 2018-19 as a base point. This was because in 2019-20 the season had not finished by June 30, when the accounts were published, and so broadcast and some other revenues were reduced to reflect this.

Day-to-day running costs excluding wages but including finance costs were then subtracted, and a final adjustment was made in respect of net sums that were due to be paid in the next 12 months, according to each club’s balance sheet.

Adjustment is then made for profits on player sales to take into account trading strategy, which would benefit clubs such as Brentfordwho have had a very successful recruitment and sale model.

Some clubs owed large amounts to owners that were theoretically repayable in the next 12 months, such as Newcastle with Mike Ashley and Brighton with Tony Bloom. In respect of these clubs a further adjustment was made on the basis that the owner was in practice unlikely to demand their money back.

On the basis of these calculations, which must be stressed are far more basic than the complexity of calculations used by La Liga, the Premier League spend on wages and transfers would fall by about £430 million, compared to the most recent accounts for 2019-20.